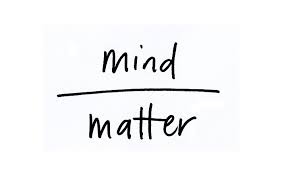 If it were only that easy.

For years I have taken the stance that certain things happen in life because we allow them too. Many, however, believe that it is fate that is behind the things that occur in our lives. And it is fate that determines when these events happen and how they happen. Fate for many is what keeps the balance of what we had intended to occur and what actually does. There is a sense of calm when we believe that things "happen for a reason". Regardless of your belief, let's dive into the topic.

Without pause, we could all agree that each of us has made certain decisions in our lives that have created a path of our successes and our failures. Therefore, these decisions will determine our overall satisfaction in what we do and what we are doing. By making these decisions, we could say that our fate is never sealed. Whether controlled or not, things do happen without explanation and regardless of that deep-rooted belief of fate. It is agreed by many that there is always an opportunity to improve our situation. That conversation would go down the path of "mindset". More on that topic another day.

With that in mind (no pun intended), and speaking more directly to our career paths, I further believe that such paths are determined by our behaviors and our actions. Simply put, it is our responses to the events (that we often times can not control) that determines the direction in which we go. Timothy Kight, an expert in the field of building leadership skills, shares this formula:

If we "are what we eat" and we "reap what we sew" then isn't it just as fair to say that if we want to achieve certain levels of achievement that we should be able to do so by applying a concept as simple as "mind over matter"? 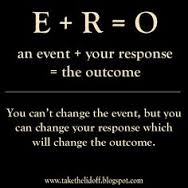 Mr. Kight emphasizes that our focus needs to be on our "responses". It is those responses that can assist in controlling much of our career paths. The "events" that happen around us (and to us) well, they are going to happen without gaining our input first. And, if we already know what our desired "outcome" should be or what we want it to be, then stay focused on the part of the equation that we can control. Again, our response.

To take it a step further, many go on to say that success is often based on two factors: intelligence and luck. Take the position you have and the position you want (if there is such a thing). To get where you are, and more importantly, where you want to be, (the outcome) which one of the two will be more likely to get you to that spot? Would it be luck? Would it be intelligence? If I am being asked, I would argue it is a little bit of both. Agree?

So, in the end and after all is said and done, I come back to two beliefs that outweigh all the others. The first, fate. We need to hold on to this. It is what helps us in the worst of times and in the best of times. It can not be overlooked nor dismissed. Secondly, and just as significantly, I believe that what we accomplish in life is in large part to "mind over matter", the response. We chose our paths based on our actions. In the face of adversity, how we handle such a beast is what makes us achieve.

With that, put your mind to it. Believe in it. Hope for a little but of luck, rely on your intelligence and do not dismiss something as deep as fate. Your resolve, and your response, will be there in the end.
Posted by Fueling Eduction at 4:42 PM 2 comments:

Pace Yourself - The Blogging Journey 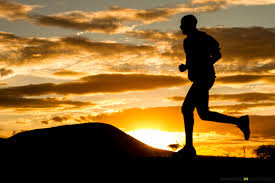 (courtesy running.competitor.com)
I am a runner.

What I have learned about running, I have applied to my work. Watching those around me over the course of time I have been able to grow as a learner and a leader and yes, even a runner. What was once a rush to apply the knowledge (and start the run) I have learned that it is not how fast you go out of the gate, the blocks or hit the trail but rather how you finish and how you feel as you cross the line.

We have to pace ourselves.

The journey of the #compelledtribe has been one in which I applied these same principles. I began as a novice writer and to this day would still consider myself just that. As I write, I often write for myself. I jot down my thoughts about the path that I am on. It is about reflection. It is about the journey. My goal is simple. Be better tomorrow that you are today.

Jennifer Hogan, an extreme blogger (and runner) asked me last year if I had any interest on a joint blogging effort. "Who me?" I said. Hardly one to recognize my own abilities as a writer I was hesitant to say the least. I bought some time and went for a run. I would have to think this one through. Would I be able and willing to commit to a task such as this that would hold me accountable for contributing a post twice a month, if not more? Would I be willing to put myself out there to my peers both near and far? This would be one of the most, if not the most, transparent things I have done as an educator and a leader. I was reluctant.

Then, as I was running, my own feet became my answer. "Pace yourself". 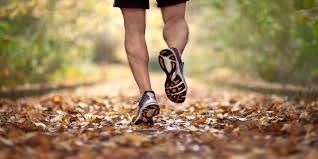 If I would be able to do this, and be able to hold myself accountable to the expectations of not only the group but also of myself, then this could be a challenge that would have a reward not measured by dollars and cents. This could be a one-of-a-kind opportunity. This could be a "game-changer". And with that, the challenge was accepted. The #compelledtribe was founded.

Over this past year I can say that I have become better at what a I do in all aspects of my life due to the relatively simple decision to join a group of bloggers and write and therefore reflect. And what I write about is what is relevant to me, my family, my work, my colleagues and my ability to lead. And therefore I am better at each of those and then some.

As you read this you are the same as I. A blogger. Ask yourself a simple questions - "Why do I blog?" For many, the answer will seem apparent. However, I challenge you to truly reflect on why it is you take the time to put thoughts on to paper and then out to the world. I am sure you, like me, are better at what you do and who you are in large part because you take the time to go for a run. Find your path and reflect on your journey and always remember, pace yourself.
Posted by Fueling Eduction at 9:09 AM 2 comments: 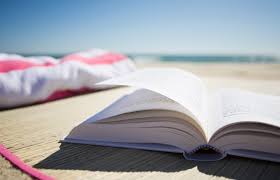 The countdown is over, summer is here!

Teachers have taken to a new routine. They are spending time with their families, catching up on chores or simply, taking it easy.

However, that is not the case for all of our teachers. Not yet, at least. Learning for many teachers is taking place on this second day of summer. The building in which I work is fortunate to host our "Summer Academy". This academy is time set aside for teachers within our district, the Hilliard City Schools, to receive additional professional development on many of the innovative ideas that continue to take shape in our forward-thinking community of leaders and learners. The courses are being taught by our district staff for our district staff. It is purposeful and it is powerful. 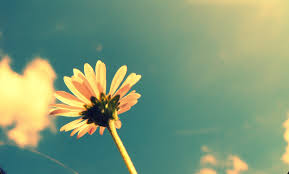 Today alone, teachers are spending their time learning about Canvas, our newly adopted Learning Management System. They are also working through iMovie and learning applicable ways to introduce this fun and creative tool to their students when they return. And, for many, they are diving into a deeper understanding of Blended Learning and our One2One initiative for our district. This August we will distribute 3600 iPads to our 6th through 8th graders. There is some intense learning taking place!

Keeping in mind that we are all learners by nature, create some goals this summer for yourself and your learning. Make sure you stay current and keep those new and innovative ideas in the forefront of your mind. Here are some suggestions to get you started:

The goal is simple. Keep the learning going throughout the summer months. We encourage our students to head to the library and practice their math over the summer. There is no better way to remind them of that by modeling ourselves.

Have a great summer of relaxing and learning!
Posted by Fueling Eduction at 1:34 PM 2 comments: