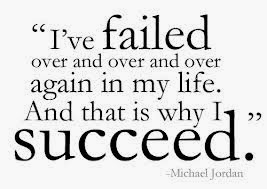 The dialogue around encouraging teachers to become better at their craft through trial and error continues to grow. Discussing failure, the kind in which teachers and administrators encourage others to take risks (even though the outcome may be less than desired) is more and more prevalent in the conversations across the academic world.

My first thoughts about failure appeared in a post I wrote in November of 2013. The work with my colleagues since that time has helped us make progress for the sake of better teaching and learning. Only a few months removed many of the same sentiments are felt. However, our understanding of what failure is, and what success can come from it, has grown.


The journey continues and I gain such great enthusiasm from watching teachers grow in their desire to see technology embedded into their teaching.
What started as a simple request, a question and "what if" has evolved into teachers taking leaps like they never thought would be possible before.

As I reflect back on these first few months of school and look for a common thread in those teachers that have taken the risk there is one underlying theme with each of them. They were each willing to fail. And, they would admit they did.  Often.

Just the other evening I was part of a global conversation on Twitter about administration and working with teachers about implementing technology into classrooms. When asked what has the greatest impact on making this occur, a common answer was "modeling". I agree, to a point.  However, I would challenge you to think of something you are already good at and think about what made as successful as you are.

Consider playing golf, tennis, a card game or, for many, being writers. Did you get better at it because of modeling? Possibly.

The answer though, and to be honest with yourself, is most likely, "no". You got better at this activity because time and time again you had to fail. You hit hundreds of serves, went to the driving range a thousand times or continued to write for pages on end. Allowing yourself to fail is the greatest attribute toward success. It's a saying as old as time and we know of countless references to politicians, inventors, athletes and everyday educators like ourselves. Success arising from failure is ingrained in our minds.

Failure breeds excellence. Are you willing to take the risk?

Considering these thoughts, and taking into account your own comfort with failure, are we creating a climate in our schools where failure is accepted and even encouraged? Take inventory as you are in classrooms and working with students and teachers and begin the conversation in your world about what failure can lead too. Creating the mindset of accepting failure as a path to great success will be beneficial to both you and your colleagues.
Posted by Fueling Eduction at 11:41 AM